I went to see Mistress Morgan Sterling for the first time, based only on Her website, which I saw after a single post about Her on maxfisch.com.

After I saw her, I felt as if I had discovered a diamond, She is radiant and appealing, a very special Lady who is both Dominant and at the same time seductive as a spider. She brought me into Her sphere willingly, without resistance. There was nothing I would not do for Her or with Her, and I came away from the experience a new man, totally redone by Her shaping of me, Her demands and insistence, and my compliance.

My arrangements with Her were for two extended sessions, one on the first day and one on the evening of the second day I was to be on the west coast. Mistress Morgan Sterling is very concerned about time. One must be punctual with Her, She keeps Her appointments precisely and She did that with me as well. She allowed Herself and me one half-hour for introductory conversation before the "session" commenced. I showed up in a business suit because I came from an important business appointment. Even though, it was not session time, She politely asked me to strip entirely and return to Her room naked. She said She believed in CFNM at all times when a sub is with Her. My imagination jumped through hoops. I wished I lived with Her.

Now, we were still in the first half hour, when She transferred me to Her bathroom, and had me sit in a chair facing the sink and looking into the mirror. She told me She was going to give me a hot water mouth soaping, and that I had to take it without physical rejection. If I moved away, even if I did so involuntarily, She would bitch slap my face and would do so hard. She said that was lesson one with Her, learning to listen and comply. Lesson 1 was what She said. I had my mouth, my tongue and my teeth, entirely scraped clean my Her hand carrying soap; I flinched several times and She harshly, quite harshly, slapped my face, and once when She thought She might have hurt me, She brought my head to Her bosom and calmed me down, comforted me like a Lioness might care for Her lion pup.

The session the first day included a lot more corporal,. including a severe OTK bare hand spanking, a red bag enema, a strap-on training lesson, and Her using me in multiple interactions with others, including Her requiring me to swallow the medicine She prescribed. I was so happy I was almost crying at Her leadership.   Then, She told me to "come back the next night" for Her real training. She asked me if I wanted to drink some of Her golden nectar before leaving. I told Her I would take it directly from the fountain the next day.   I recommend Mistress Morgan Sterling whole-heartedly.    d 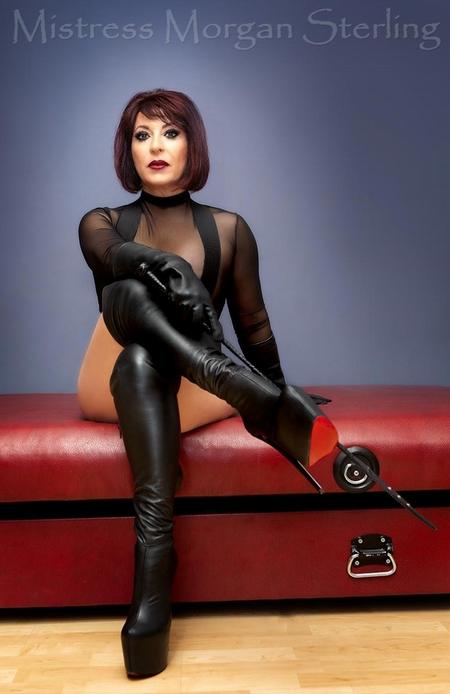